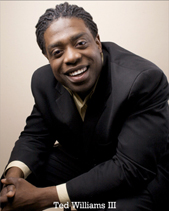 Ted Williams is a tenured faculty member who teaches Political Science at Kennedy-King College. He holds degrees in Public Policy Studies from the University of Chicago (M.P.P. ‘02), and Rutgers University (B.A. ‘98). He is currently a host/panelist for WYCC televison’s "The Professors" talk-show. In addition to teaching he also had an extensive performing arts career which includes commercial and video work for McDonald’s Corporation, Six Flags Great America, Federal Express, Astellas Pharmaceuticals, and Accenture. He founded the 3rd Dimension Performance Group in 1999, a touring theater company that produces dance and murder mystery dinner theater entertainment. In 2002, the company premiered Torn, The Musical, which toured major Midwestern Universities. From 2003-2007 the 3rd Dimension conducted theater-based trainings for the Chicago Housing Authority’s Plan for Transformation. He has also worked as a dancer, choreographer, and dance instructor in Chicago, New Jersey, New York, Indiana, and Washington D.C. Williams is a co-founder of The Way Christian Ministries, and writes extensively on issues of faith and public policy. He and his wife Roslyn are the proud parents of two beautiful little girls, Gabrielle and Amaris.

Roslyn Williams has been with 3D since 2005 handling administrative and program development projects. She has extensive project management skills and experience working as a Project Coordinator and New Product Introduction manufacturing Engineer for several small and large companies. She has also taught K-1st grade theatre classes, in addition to working on numerous community service projects. She holds a B.S. in Manufacturing Engineering Technology (Northern Illinois University, 2000) and is the proud mother of Gabrielle (4) and Amaris (2) Williams.

Mrs. Moody has been with 3D since 2006 handling administrative and program development projects. She has extensive project management skills and experience from working as a Value Improvement Engineer and New Product Introduction Project Manager for several Fortune 100 companies, along with sales and educational experience as a Real Estate Agent and a Mathematic Instructor for the City Colleges of Chicago. She holds a B.S in Electrical Engineering (Univ. of Pittsburgh ‘90), a Masters of Science in Manufacturing Systems (Lehigh Univ. ’95) and a Masters of Science in Instruction (Drexel Univ. ’06) with a Mathematics focus. In 2003 she switched career goals from corporate-America to social based endeavors to better serve her community. She is married to Leonard Moody Jr. and has three boys, step-sons Leonard III, and Preston, and toddler Silas.